It was March of 2014 and we had pushed together the desks in our small office to fashion a long boardroom table. On the table were our desk lamps illuminating cookies, coffee, and mixed nuts. Around the table sat Michal Hay and Nathan Rotman, field directors for the Olivia Chow team as well as Jennifer Hollett, Olivia’s digital director. The conversation went as follows:

Assessing the campaign landscape in March

Olivia Chow was launching her long anticipated campaign for mayor into one of the strangest and most unpredictable landscapes that a Toronto mayoral candidate has ever had to contend with. The sitting mayor had been stripped of his powers, after admitting to drug abuse for which he has refused to seek help, and under investigation by the police in connection with damning video which some believed was responsible for the death of a boy in the mayor’s former council ward. Toronto’s dirty laundry was being aired daily across the globe.

from Rootscamp 2014: 10 Things Progressives Can Learn From Rob Ford

The city had had enough, and the buzz of Olivia’s possible run for mayor was a light at the end of an internationally embarrassing tunnel. Pollsters had been prospecting and in every case Olivia was out in front, by a mile. With an unlimited budget, Olivia could sweep the city, broadening her appeal in the outer suburbs, and holding her base in downtown Toronto. But her budget wasn’t unlimited; Toronto mayoral campaigns budgets are capped at $1.2 million (plus fundraising costs) and her team had extraordinary ambitions. To add constraint, Olivia was announcing in March and the election was in October. That’s $1.2 million for an almost nine month campaign, which is uncommon in Canadian politics.

The city of Toronto was divided into two groups: the downtown core that identified as progressive, and were angry at what they perceived as an attack on their urban lifestyles under Ford - removal of bike lanes, threats to city programs - and the outer suburbs who felt disenfranchised and ignored by know-it-all downtowners. We all talked about unity, but the city was just too big and divided to reach all voters with $1.2 million.

Hay and Rotman felt strongly that the only way to reach voters across the divide was through their neighbours. The field campaign wanted to build neighbourhood teams in all 44 electoral wards in a snowflake model. The distributed field campaign would be trained in how to deliver public narrative and represent Olivia at the doors. The only possible way to manage the teams and recruit this army of supporters would be to match it with a digital campaign focused on volunteering, recruiting friends, and turning out volunteers.

Guest post by Jennifer Hollett: How a Digital Mayoral Campaign is Taking on Rob Ford

Olivia Chow was interesting as a candidate to bridge the urban-suburban divide because she shared life experience with both sides of the aisle. She immigrated to Toronto and grew up working class in a low income neighbourhood, the only child of parents who had traded good jobs in Hong Kong for precarious and poorly paid work in Canada. She went to art school and became politicized fighting for refugee rights. She’s an outspoken outdoors woman who served the public in city council, and parliament and shared her life with one of the country’s most beloved politicians, Jack Layton.

The narrative we wanted to communicate was that she is a woman of substance and character, and that her policies are drawn from the experiences that she shares and has shared with the people she’s seeking to represent. This was the key to expressing that even though she was the frontrunner, her candidacy was sprung from the grassroots.

The original site design was focused on the city of Toronto, the people and the candidate. We used non-traditional photos of the city as backdrops (i.e. no major landmarks). We played up photos of volunteers and supporters and, except when asking for donations, used candid shots of the candidate.

On the homepage we prioritized a signup page above the fold. The communications department recognized that while the website would be actively field-driven, the majority of repeat visitors would be journalists and so our secondary content (straddling the fold) was an engaging news feed. As the campaign landscape changed, persuasion became more prominent on the site.

Aside from the needs of comms and field (which we’ll go into in depth below), Olivia’s fundraising team used the site for donations and peer-to-peer (P2P) fundraising. NationBuilder has built in P2P capabilities but not a very engaging out-of-the-box experience. We build a P2P landing that was a step-by-step guide for how to set up your campaign. We co-opted the personal profiles on NationBuilder and designed them differently for people who had set fundraising goals versus those who hadn’t. 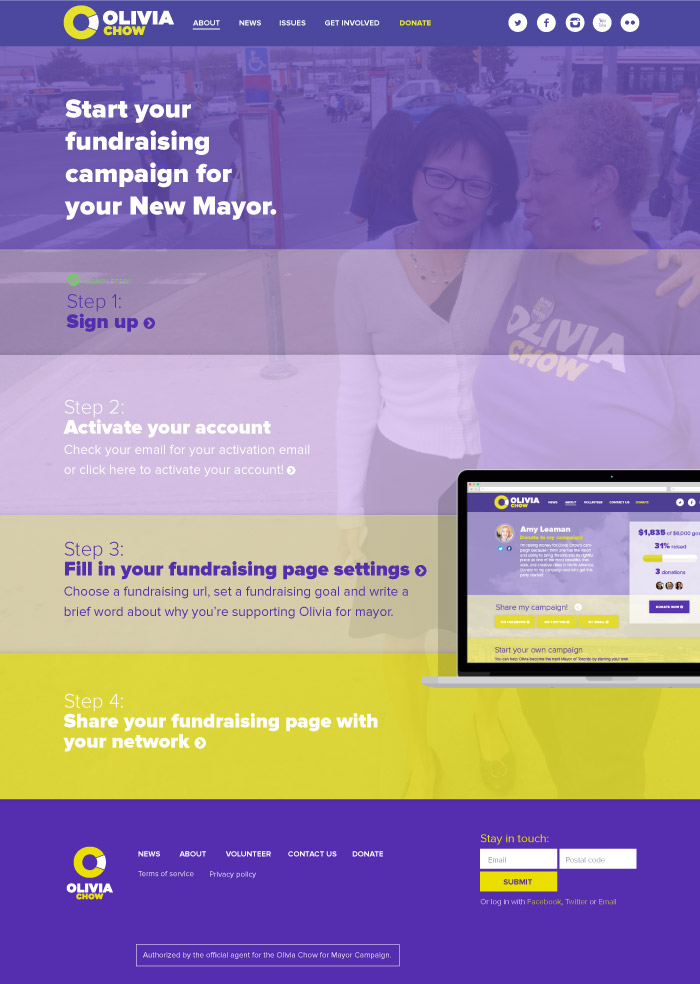 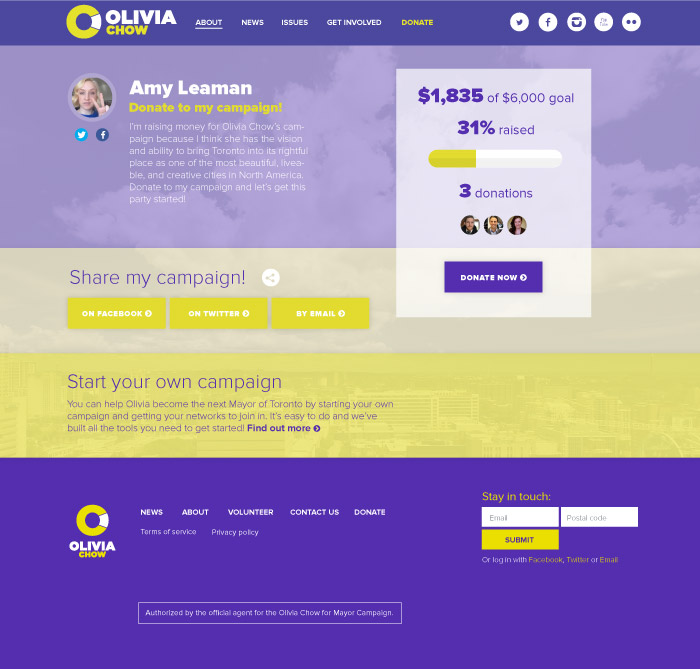 In a sense, Olivia Chow had three versions of the website. The first was for people who hadn’t yet signed up. This was geared primarily around acquiring email addresses and handraising to volunteer. When people had submitted their email address, the homepage changed, and folks were encouraged to “activate their account” to get their Olivia Chow dashboard. The dashboard was an activity centre that was intended to gameify participation in the campaign, and create a high-touch active experience to compensate for the capacity of the campaign. The dashboard included the following key elements: 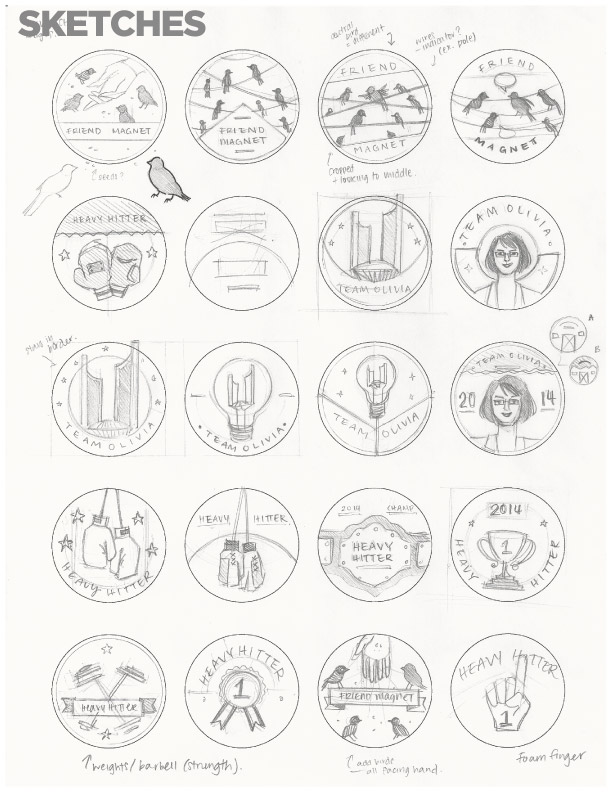 In the initial discussions, badges were a tool to reward participation among supporters for actions they could take online and off. When you sign up to be on Olivia’s team, you get a “Team Olivia” badge. This is your induction into the campaign. From then on, wherever we could find an indicator in NationBuilder to power a badge, we would reward one. The user workflow around took time to perfect and relied strongly on people sharing the badges on social media.

Tiles were cards that contained activities (like, get a lawn sign, recruit 5 friends) and would “flip over” when they were completed to show you what you had done. These were intended to give supporters activities to move them up a ladder of engagement to becoming on-the-ground volunteers and activists. The activities were purposefully low-threshold asks that people could complete on their own time, the majority of which earned them badges.

Action tiles had different states based on a users activity

Social proof and incentives to participation

The dashboard also included the ability to connect your social media accounts to see which of your friends had joined. One of the key asks after signup was to recruit five friends. This was a shifting goal since once you had recruited five friends, you were asked to recruit 10! Supporters could see who they’d recruited directly on the site. A countdown to the election was also used both to create urgency and as well as a way of making supporters feel like insiders or like they were part of an important mission. 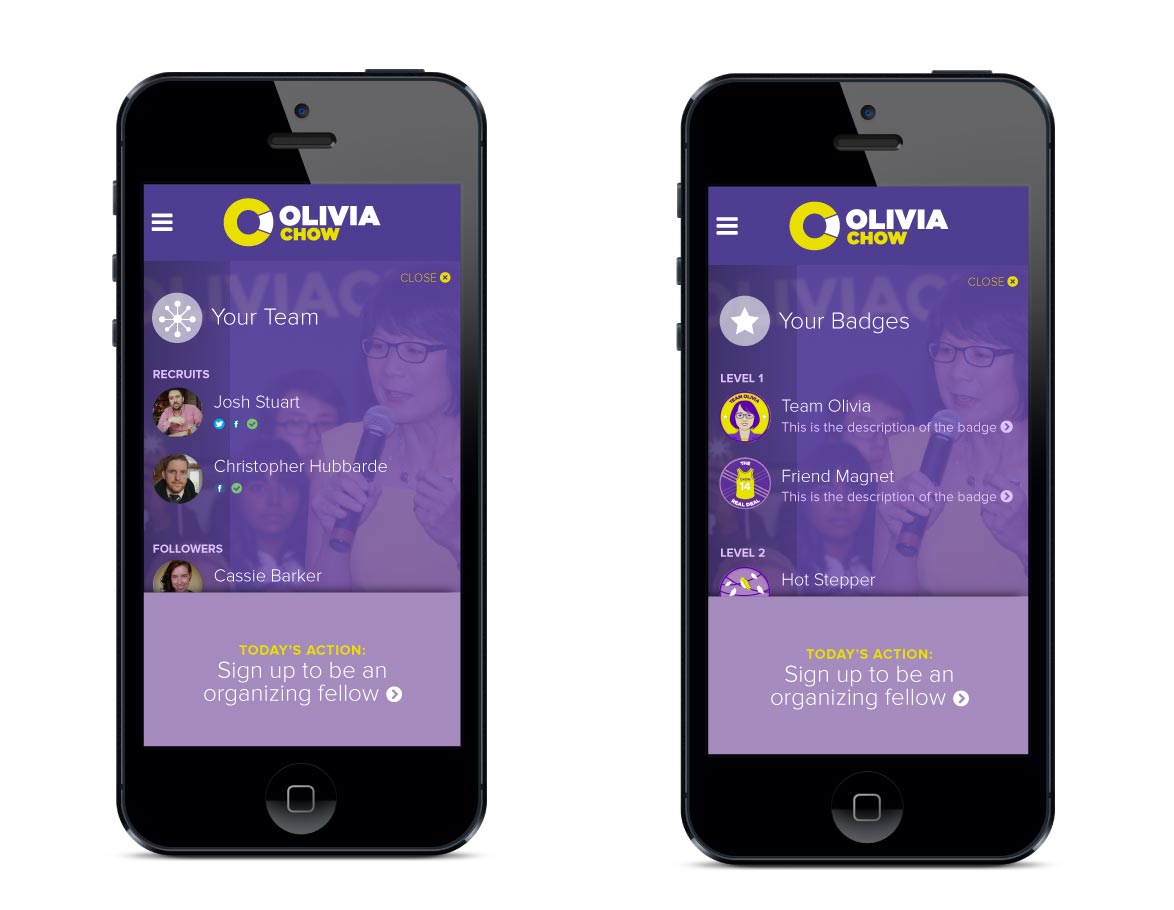 The campaign began to really ramp up around Labour Day, and Olivia was the only candidate with a full platform. The campaign wanted to play to this strength and so we developed a platform page that laid out her key policies in a compelling way. We used bright colours, icons, and animations (the cards flipped over) to make the content more engaging and tiered the content so that it wasn’t dense. The visible side of the card had a brief headline and icon, the reverse side of the card contained a little more detail and explanation and finally you could click through to read the whole platform. This piece is actually the one that we heard the most positive feedback on. It made the campaign vibrant and accessible in a way that other candidates were not doing. 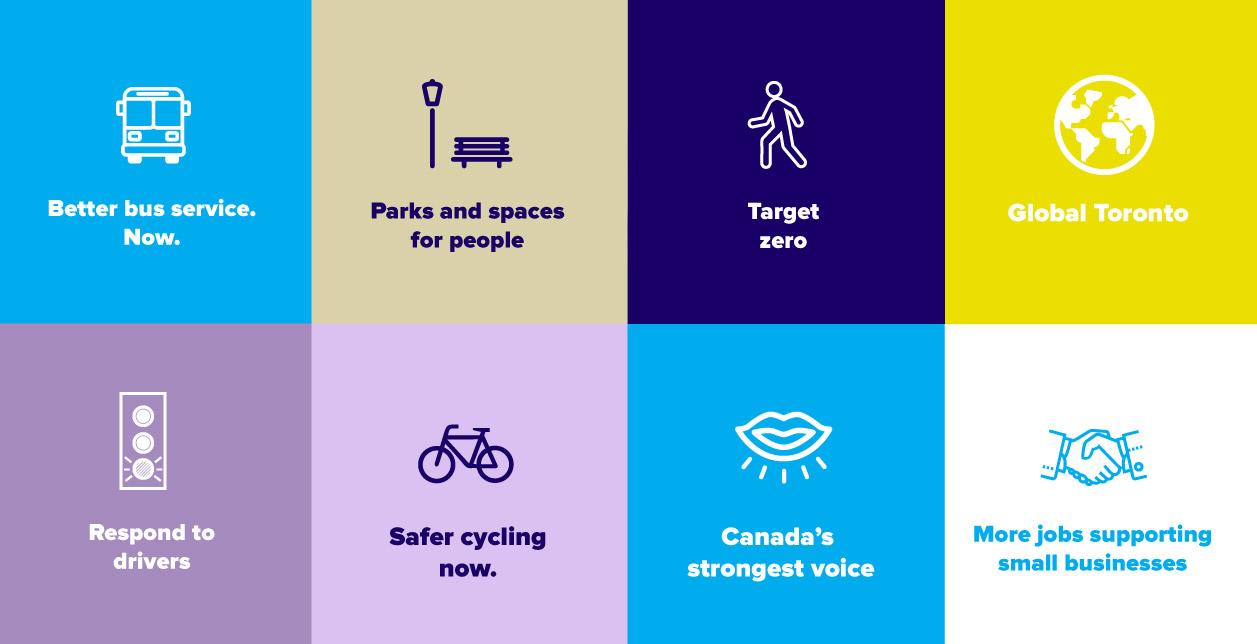 What we would have done differently

By mid-August across the city we had felt a shift in how the campaign was going. The Ford sideshow had not abated. Rob Ford, caught in another substance abuse scandal had relented and gone to rehab. On his return he was diagnosed with stomach cancer and Doug Ford, his less charismatic brother took his place as candidate for mayor. Olivia’s campaign, which was largely premised on her diometric opposition to Rob Ford, began to lose water and John Tory appeared out of the fray - the steady, conservative father-type who would come in and be the safe choice for the city. It became apparent that what Toronto was looking for was not a new course but the same course with less drama.

Olivia ultimately lost the election but as public as that narrative was, a much more interesting and behind-the-scenes reality emerged. Olivia’s downtown base went to Tory (in what some people might call a strategic vote to keep out Doug Ford - but we won’t speculate on) but she gained significant ground in the outer suburbs. The work that Hay and Rotman had done to build neighbourhood teams was effective and they built incredible capacity among volunteers. As of the time of writing this, these teams are still engaged and active in their communities, many are working in city hall or on federal campaigns, and we wouldn’t be surprised to hear they were organizing still on other issues.

While hindsight is 20/20 there are some things we would have done differently:

We wouldn’t have co-opted the home page for the digital field program but rather built in more flexibility for the campaign to be responsive sooner and created a separate area for the dashboard that was exclusively designed for volunteers. If this had been done, we could have included a discussion board or some way for volunteers to interact with each other.

There was a lot of potential in the P2P fundraising in the early days but there wasn’t as much interaction between our team and the fundraising department. This was a good opportunity to deploy a robust P2P campaign and it would have been something novel and unique in the race that could have been spun into a good story about grassroots fundraising.

We would have liked to offer more design support and had a deeper role in creating graphics, shareable content, and policy content in the early days. We scrambled to offer some of this support (sometimes as individuals on a volunteer basis) in the later campaign. As always, time constraints get the best of everyone!

The badges and tiles were designed to capture the momentum of Olivia’s run. When that momentum began to subside, the badges and tiles made less and less sense, and the investment we had put into them was wasted. They just weren’t as popular as we had hoped.

We’d like to acknowledge Jennifer Hollett, Digital Director, who did an incredible job of managing and running the digital campaign, who trained hundreds of people in public narrative, who was a mastermind and a champion of optimisation and responsiveness in the campaign. The social media campaign had six times the reach of any of our competitors and drove the grassroots narrative overall.

We’d also like to acknowledge Michal Hay, whose instincts about everything digital were bang on and to both Michal and Nathan Rotman for taking risks and trying something new and building a fierce ground force for Olivia. Truly inspiring!