New Democrats are beaming today with the news that Jagmeet Singh has won the NDP leadership, making him the first person of colour to lead a political party in Canada, and groundbreaking in doing so with a message of Love & Courage. We worked with a few of the leadership campaigns, including Singh’s. Here is a recap of some of the tools he used to win:

In this leadership campaign, all fundraising and membership sales were processed through the central party. This can pose a challenge for campaigns to be able to build relationships and engage the people who are donating and joining the party to do other things like volunteer, and turn out to events. It also prevents campaigns from seeing if anyone is spooked by the membership process, showing interest and then dropping off when they see the credit card form. We helped the campaign set up their site with landing pages that capture email addresses and phone numbers before going to the membership page. This allowed them to follow up with anyone who started the process but didn’t complete it, while educating them on the voting process at the same time.

Jagmeet’s message of Love and Courage was bold, exciting, and needed in a political climate with a lot of hate and fear. It also strung together two foundational NDP quotes: Jack Layton’s call that “Love is better than hate” and Tommy Douglas’ call for “Courage, my friends, tis’ not too late to build a better world.” 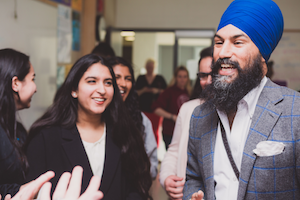 Read the article We put Hustle to the test. It worked.

Earlier this summer, we wrote about how the Jagmeet Singh campaign used Hustle, the one-to-one phone banking tool popularized by the Bernie Sanders Campaign in the United States. One of the key characteristics of the Jagmeet Singh campaign was the enthusiasm of their volunteers and supporters. Hustle was a great way for volunteers to contribute. If you were on Jagmeet’s list, you definitely got one of these messages.

Volunteers used Hustle to invite people to events, sign up new members, and get out the vote. If you signed up on the Jagmeet Singh campaign website, you would have gotten an invitation to join their Slack. The campaign had multiple channels on different themes, and geographies. This enabled volunteers to share campaign stories, pass around news articles, discuss controversies, swap memes, and organize locally. The nature of slack allows campaign staff to respond quickly to local volunteers and to control responses to issues that may come up in the media in a way that the volunteers and the official campaign can speak in one voice. It was also a major player in maintain the excitement and morale of the volunteers.

cStreet would like to extend a warm congratulations to Jagmeet Singh, Digital Director Nader Mohamed, and Campaign Director Michal Hay, as well as all the volunteers and campaign staff. This is a proud day for the party and for Canada. We’re excited to move forward with ❤️ & 💪🏽