Our work with FCM was a personal Everest; one client, two languages, and four sites with the aim of making municipal issues election issues.

The Federation of Canadian Municipalities (FCM), is the federal voice for municipal governments across Canada. We began working with FCM in 2014 to launch a national campaign asking Canadians what made their cities and hometowns unique. Over the last year and a half, the project has grown into four vibrant websites (Citiescan.ca, Hometownproud.fcm.ca, and in french: Nosvilles.ca, and Fierdevivreici.fcm.ca) and evolved from focusing on hometown pride to a national umbrella campaign for FCM’s issues in the lead up to and during the Federal Election.

Earlier this month, FCM announced the launch of an extensive set of election must-haves, or the Election Planner, to better inform and engage Canadians across the country.

As we approach October 19th, the Election Planner makes it easier for you to make the right choice on E-day. The key to increasing voter turnout is making it more accessible. With FCM’s help dissecting the numerous policy announcements this year, we put together a Policy Tracker. This tool streamlines policy announcements and presents relevant urban and municipal policies recommendations pertaining to better transit, affordable housing, sustainable infrastructure, and the economy.

On a more granular level, the Policy Tracker makes FCM’s policy recommendations more tangible and allows supporters of all levels of understanding become policy wonks and engage with their local candidate.

We built an accompanying tool that helps voters find out which local candidate to vote for: The Candidate Lookup tool. When you enter your postal code or select your riding, the tool shows you which of your local candidates have committed to make municipal issues their priority.

If your local candidate of choice has not made the commitment to municipal issues, you can reach out to them using pre-populated mailtos and tweet prompts. 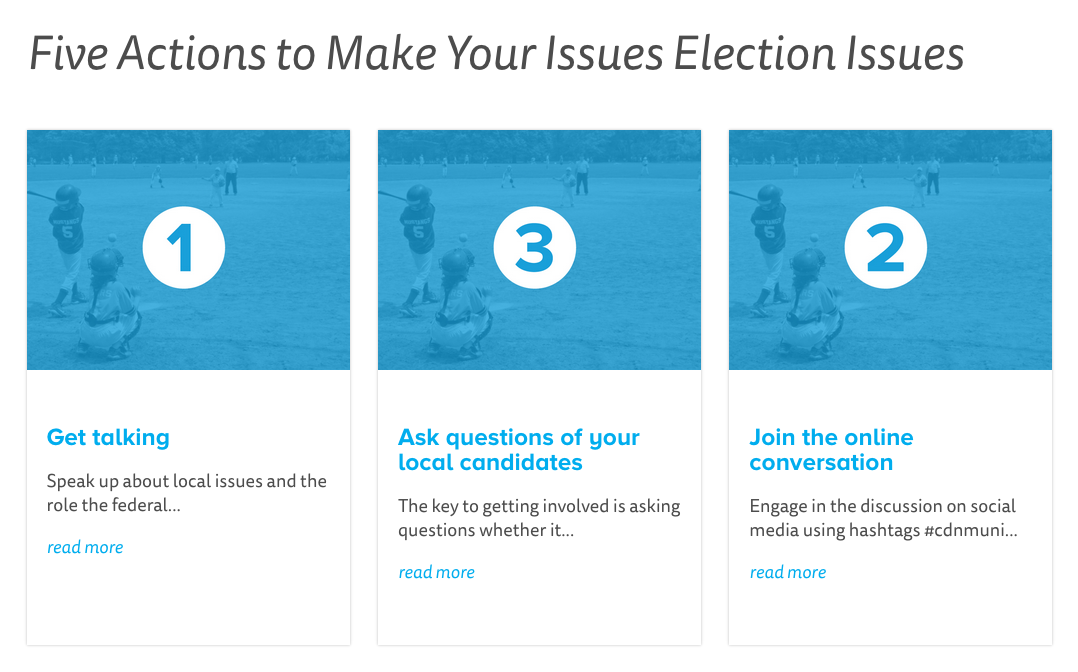 Lastly, the Election Planner includes an Election Toolkit: a collection of resources that mirror the ladder of engagement and allow a supporter to gain an understanding of FCM’s policy recommendations, share them with friends and family, and then engage their local candidate. The toolkit is simple but not simplistic, and encourages supporters to get informed and involved by making it easy and voter-centric.

Open government is the future, and our work with FCM showcases just that. This election season we've built the tools to make municipal issues election priorities.