First, a couple caveats. These are based on a non-donor voter living in the riding of Toronto-Centre. Also, it’s impossible to tell what’s an A/B test segment and what was the final blast. All emails were opened and analysed using Gmail, Google browsers and Android.

The overarching, obvious goal of the Federal NDP bulk email program during the 2015 Federal election was to convert the supporters on the email list into donors. As the supporter hadn’t donated before, the asks were consistent, staggered, and low.

Below are a few insights and thoughts based on a review of each of the emails I received during the campaign.

It is best practice to customize landing pages and make them appealing, specifically for fundraising emails. The Federal NDP leveraged these landing pages in a similar way, and so when you clicked on the donation call to action, you were directed to a donation squeeze page  (squeeze pages are pages that remove external links like footers, menus etc) that pre-selects the amount that was tailored to the supporter and automatically populates the fields with the supporters contact information.

This is a great tactic for removing attrition to donate and removing one of the steps supporters had to take to donate. 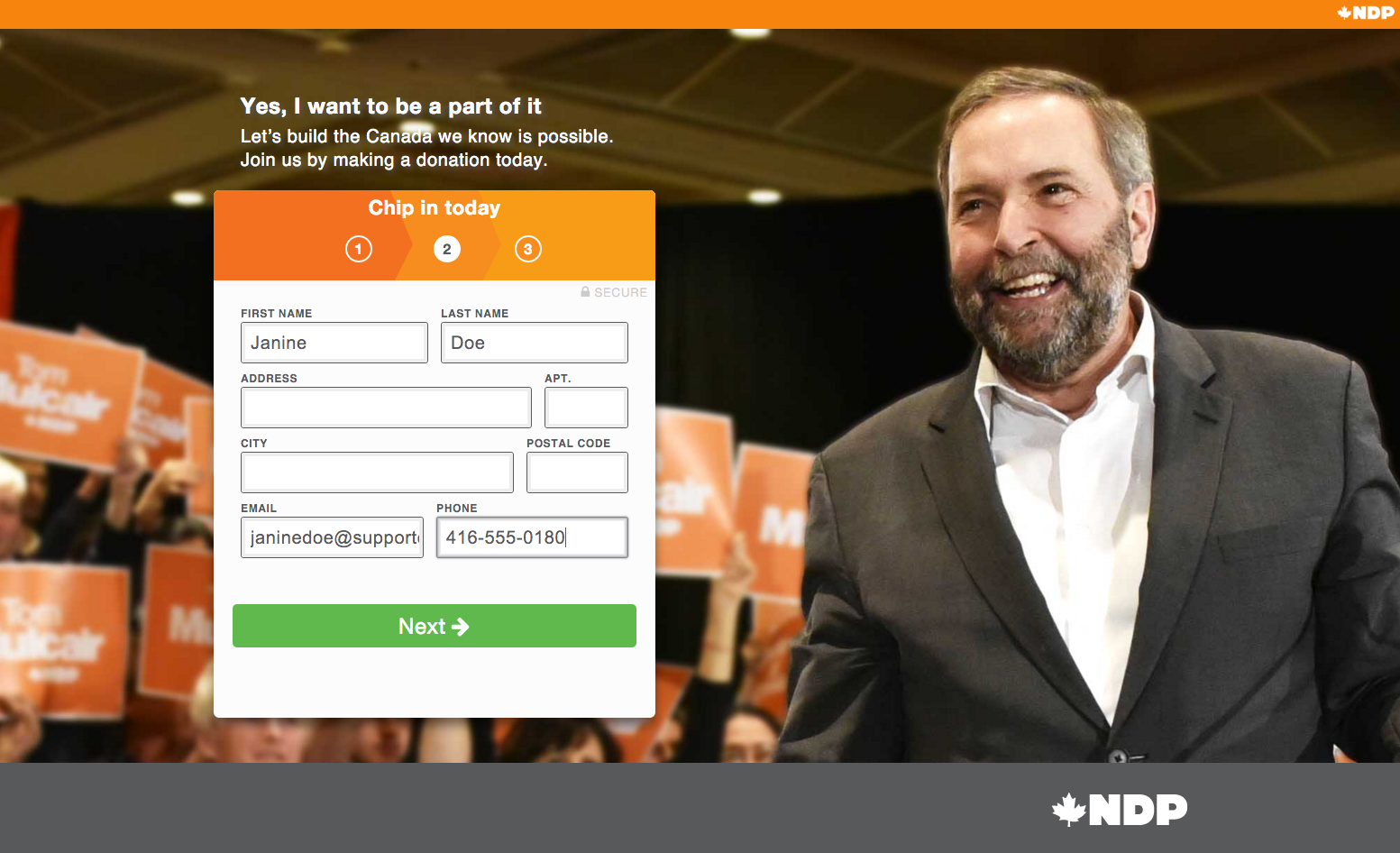 In addition, there was no real tax credit information on some donation squeeze pages which for a first time donor (which the recipient of these emails was) which may help sell a new donor on making a contribution.

We learned that landing pages are crucial, and better when they:
Use squeeze pages
Auto-populate the supporter information when they click the link in an email
Reduce choice

One of the Federal NDP’s strengths going into this election was the breadth of support and momentum they had going into the election. This meant enthusiasm from supporters as well as notable public personalities including David Suzuki, Stephen Lewis, and NDP luminaries like Ed Broadbent and National Director, Anne McGrath. 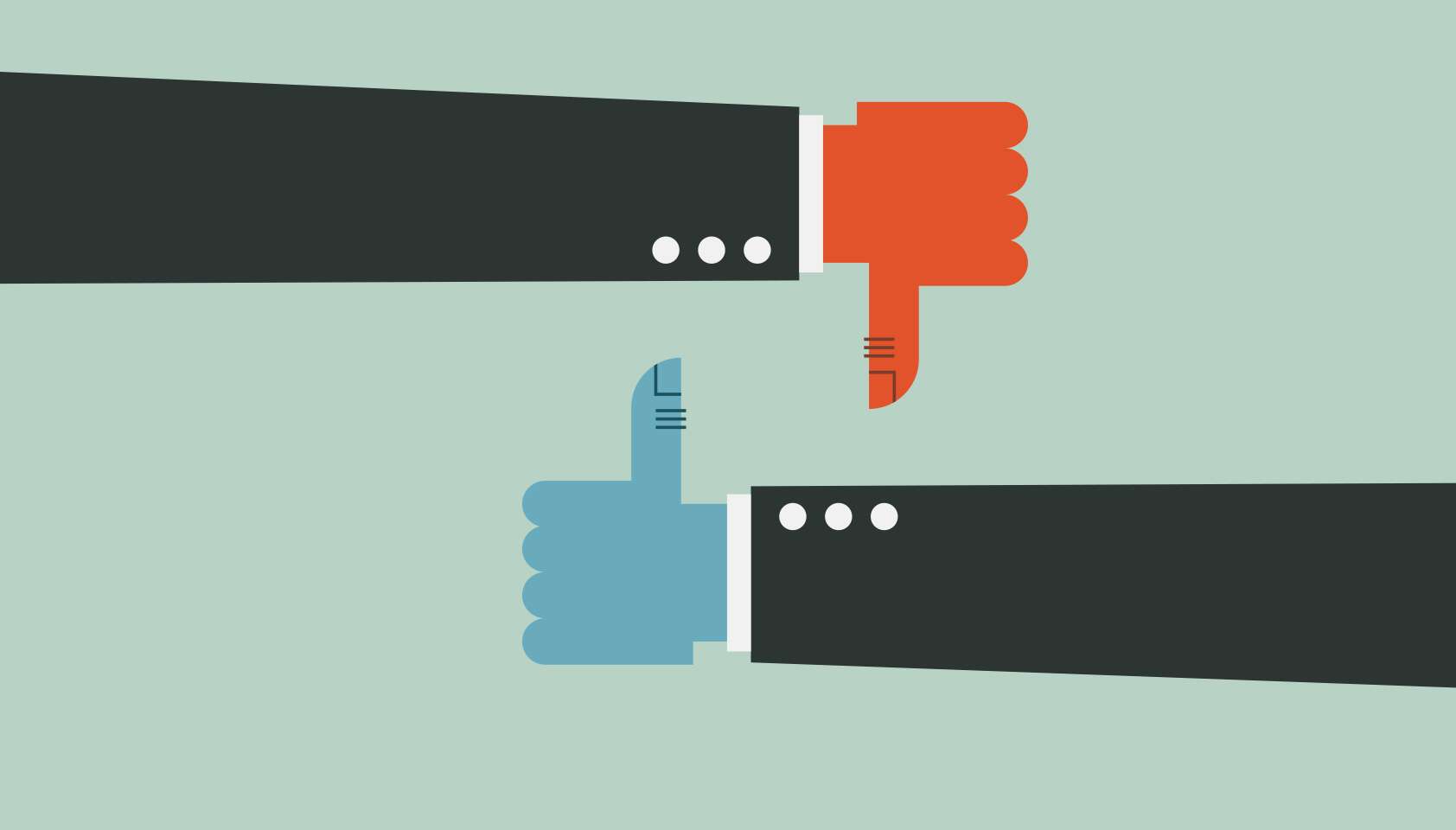 A/B test it! Find out how you can experiment with A+ broadcasters

The case for staggering your A+ broadasters

As a consequence, emails were sent from a variety of personalities and were staggered. Emails from Tom Mulcair himself weren’t succeeded by a kicker email from his partner, Catherine. This was a key tactic so that an email sent from Catherine Mulcair wasn’t wasted and wasn’t left unread in inboxes. Instead, from lines were, presumably, sent to users who read most if not all emails from the Federal NDP. 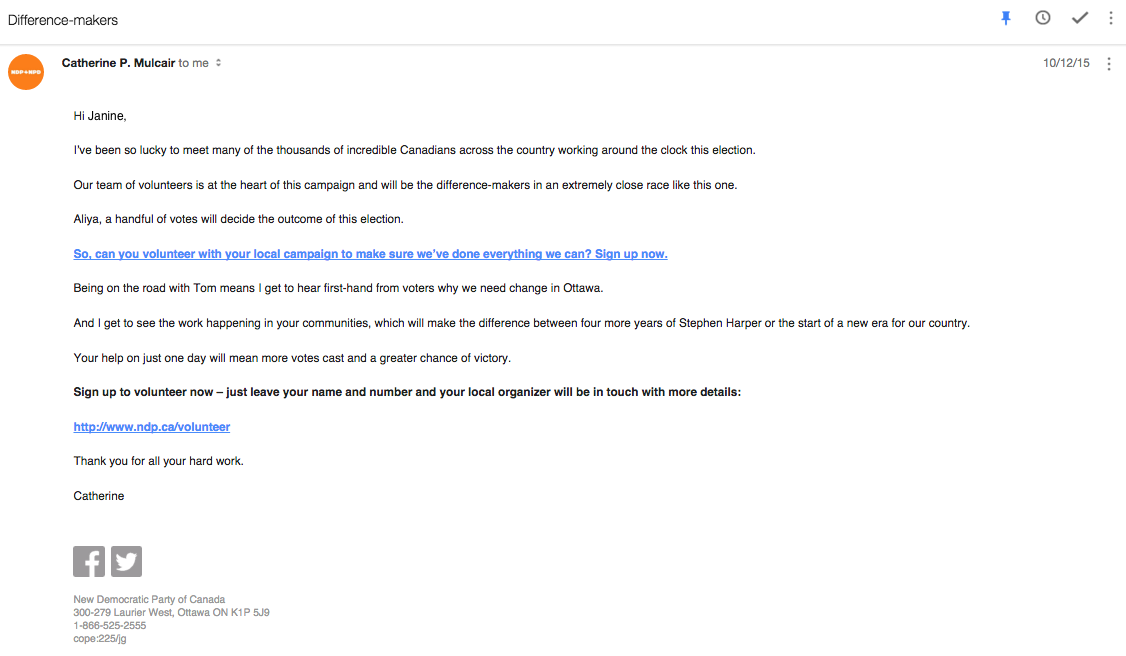 The case for multiple “from lines”

Emails related to the debate were sent from NDP staff and campaigns teams. Let’s be honest, most email recipients know how these emails work. But, by sending an email about the debate from NDP representatives saying that Tom was preparing for the debate, further highlighted Mulcair’s debate skills and dedication to hold Harper to account.

Emails pertaining to the debate instead were sent from Dave Hare (Director of Operations) implying that he like you, the email recipient, would be watching tonight, popcorn in tow.

The biggest mistake of email campaigning is filling it with too much information. The thinking behind that is that if you’re sending an email it might as well convey all your information in one go, and is often wrong and discourages recipients from reading the entire email.

The Federal NDP were efficient and successful in:

Knowing the difference between above the fold vs. Below the fold

Emails featuring videos or share prompts would keep only the link and greeting above the fold, so that if you opened the email on your mobile device or on Google Inbox it would show you the part that the campaign prioritized first, and if you were interested, you would be able to scroll below the break and read the rest.

The now-popular “Your Track Record” tactic was used to encouraging the supporter to donate was smart in reminding well-intentioned but perhaps forgetful supporters to donate.

Many of the fundraising emails featured this neat track record, customized to the recipient’s profile. Here, the email would show your name and your support so far.

What we can take away from this is the strategy of accountability is the impact of social pressure, and the importance of building relationships with supporters. Your Track Record sets goals for supporters, rewards them when they donate (through thank you emails and the track record reflecting yearly donations) and makes supporters feel accountable as well as accounted for by the NDP. In addition, supporters don’t feel forgotten.

by Aliya Bhatia and Josh Stuart