The New Civil Rights Movement: One Champion at a Time - cStreet Campaigns

The New Civil Rights Movement: One Champion at a Time

The New Civil Rights Movement: One Champion at a Time

cStreet and The New Civil Rights Movement (NCRM) have worked together before, first joining forces in 2014 when founder and editor-in-chief, David Badash, wanted to move the site to NationBuilder. Since then he’s continued to grow NCRM, reaching millions of unique impressions and page views a month and becoming one of the top 3 sites running on the entire NationBuilder network by traffic. 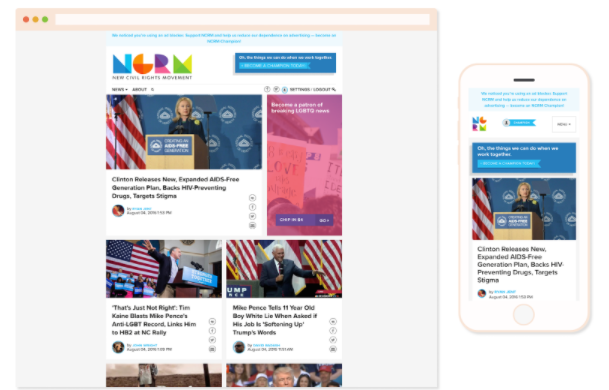 Print is dead. How can online publications monetize traffic?

That’s what we came together to explore in early 2016. Pulling best practices inspired by Press Progress, The Atlantic, the New York Times, SB Nation, and Jezebel, we talked about personalization, programmatic advertising, and encouraging loyal readers of the platform to become advocates and champions of the cause.

We began by personalizing calls to action and delineating our priorities. This process is the most important (I’m biased) because it impacts every component of the project. David and our team worked together to identify NCRM’s most important priorities and the data we wanted to acquire from readers. That investigation proved crucial to the copy-writing, design, and best-practice research phases. 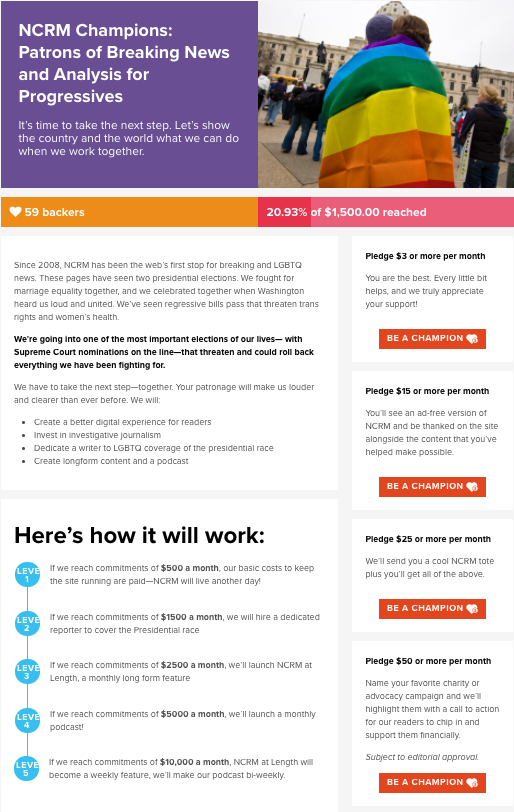 What has previously been a top-down relationship between the media and readers where publications decided what they want to cover, increasingly is changing. More and more, new media sources are looking toward their readers to determine their approach and focus. We wanted NCRM to be at the forefront of this shift. Using a Moneybomb page type, we created a Kickstarter-esque landing page where readers could feel ownership over the coverage and play a vital role in the growth of the publication. We bolstered this by taking a look at the language we were using, emphasizing David’s first-person narrative and third-person pronouns to put the readers at the forefront of the platform.

NCRM is built on a community of readers 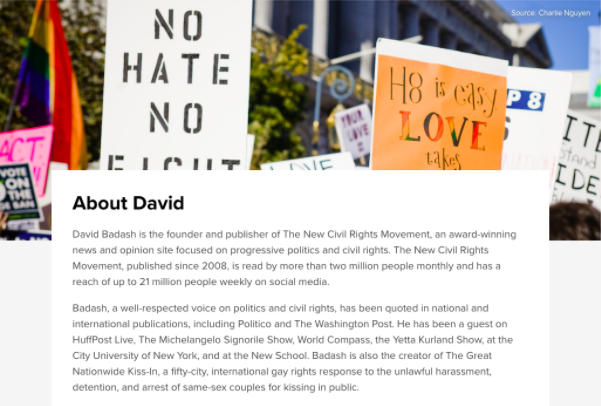 That was the thread we wanted to string through the entire project. That’s why instead of a typical About page where brands and publications talk impersonally about what they do, we wanted to tell a story and showcase the voices of David’s readers. Similarly, for the Advertising page, we wanted to illustrate who the average NCRM reader was (spoiler: they’re anything but average).

If it ain’t broke

David lives an incredibly busy life writing, editing, and publishing articles almost every hour of the day, so we didn’t want to over-complicate anything and leave him with even more moving pieces. That began with an audit of what assets he had and what tasks and pages were getting in the way of NCRM’s priorities and goals.

We didn’t want to recreate the wheel. Best practices guided the way at every juncture and we looked at what worked and what didn’t, and everything that worked stayed.

Finally, we couldn’t have done this without David, who showed enthusiasm every step of the way. Change is tough, but his commitment to his readers and trust kept us inspired and on our feet (figuratively, no standing desks were used in the making of this project).

If you haven’t already, check out Thenewcivilrightsmovement.com today.