Pivot Legal Society has been fighting for Vancouver’s downtown eastside community since 2001 through legal challenges, legal education campaigns, public engagement, and other projects aimed at highlighting the struggles and insights of “people living on the margins of society.”

Their Executive Director, Katrina Pacey, was recently recognized for her work advocating for sex workers across Canada and for her role in the Supreme Court’s decision to strike down Canada’s anti-prostitution laws in December 2013 (Go Katrina!)

Pivot is an early adopter of NationBuilder and has made a lot of progress since it started using the product. However, they came to us recognizing the many opportunities for list growth, donor acquisition, and deepened engagement.

One of our strategies in our work with Pivot was to leverage Twitter, specifically recurring Twitter imports, to conduct supporter outreach. This is a technique used to import multiple followers into your nation through Twitter, and growing your list of potential targets for advocacy.

You want to identify who your target audience is? For Pivot’s case, the archetypal donor would look something like this:

You could also generate more leads by importing those who your Twitter accounts follow but that might get a bit unwieldy if it gets upwards of thousands of accounts.

When setting up individual imports, you can set a variety of data points on the backend in order to classify and tag individual records so that I am able to sift through them when you’re ready to start reaching out to these individuals. In Pivot’s case you can tag your individuals based on an issue or a task, ie: homelessness or email for gala.

Once you begin your import, the followers are auto-imported into the nation as prospects.

Setting an import limit can be helpful and make it easier to mine the data as well as help you remain within your NationBuilder account and usage rates.

When your import has finished, you can run a filter on the tag homelessness or email for gala and should see all the folks you’ve imported as well as an advanced NationBuilder filter looking for those folks that fit the archetypal donor profile you drafted up earlier, by filtering those who have:

Example of an advanced filter 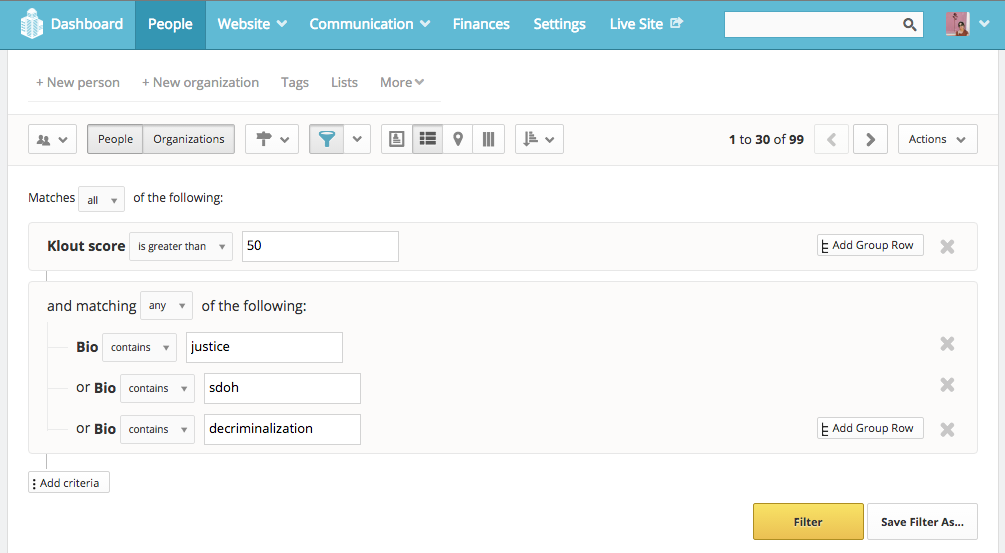