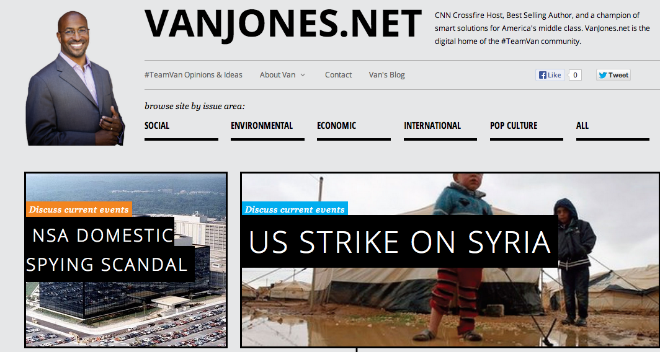 Today we’re pleased to announce the soft-launch of our latest project: #TeamVan at VanJones.net.

The project – a revamp of CNN Crossfire host & best-selling author Van Jones’ official site – has been in the works for several weeks and has soft-launched today to accompany the first episode of Crossfire.

The site has evolved from being a traditional biography-driven site to an interactive community for supporters of Van Jones, informed by Van’s desire to use his prominence on CNN to facilitate robust conversation and crowdsource community opinion on the topics he’ll debate on Crossfire.

We hope everyone will tune in tonight (Tuesday, Sept 10th) at 6:30 p.m. EST to watch the first episode with Van, and join the conversation on VanJones.net & #TeamVan.

Over the coming weeks we’ll be doing user-experience and A/B testing on the site to evolve and iterate it further.