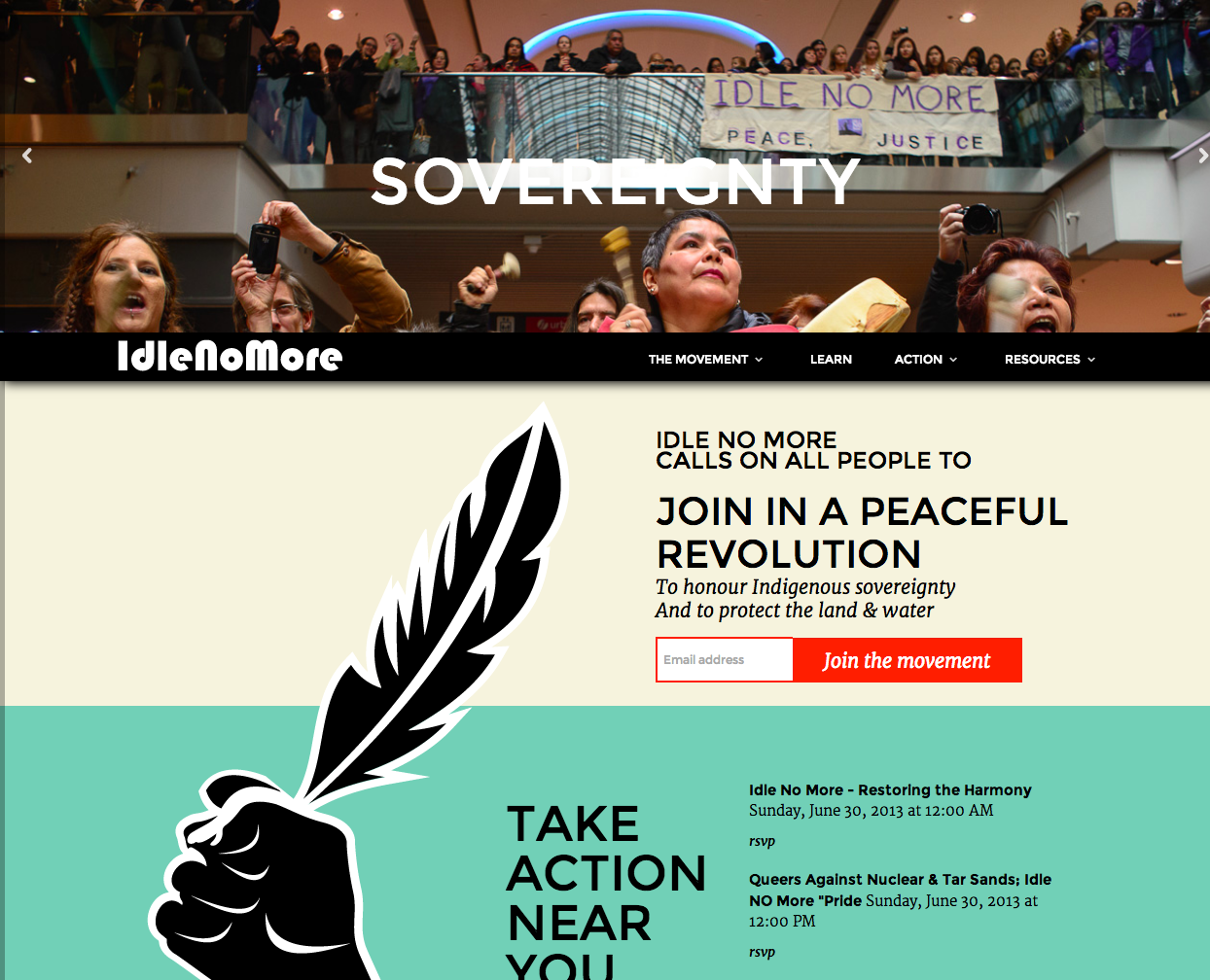 **Below is a press release from our friends and clients at Idle No More, whose new NationBuilder powered site launched earlier today.**

FOR IMMEDIATE RELEASE: This Friday, June 28th, Idle No More will launch a new website and communications platform that will engage hundreds of thousands of people via the web, social media, email, and text. Timed to coincide with the beginning of Sovereignty Summer (#SovSummer), Idle No More and Defenders of the Land’s joint campaign officially launched on June 21, 2013, the new site will allow the Idle No More movement to coordinate events and actions around the world. On Friday the new site will be live on idlenomore.ca and idlenomore.com.

At the heart of this new website is a contact database of over 100,000 people who are active in the movement. To enable ongoing and effective coordination of future events, this database will create separate contact lists of people involved in Idle No More, such as those living in a specific territory or community, those interested in drumming or singing at an event, or those inspired to host a Sovereignty Summer – Idle No More action or event.

“We know that this is a global movement and with this new website grassroots organizers everywhere will be able to connect, share resources and see all of their events and actions - literally on one map,” explained Los Angeles, California based Crystle Lightning, recording artist, actress, DJ, and Idle No More organizer.

The new website is built on the NationBuilder platform and has been designed and developed by the team at cStreet Campaigns. "Idle No More is the premier social change movement in Canada - and the world - right now,” said Amy Leaman, VP Operations, cStreet Campaigns. “It's a movement lead by First Nations that's challenging neo-liberalism and fighting for the future of the planet. We're grateful to have had the opportunity to provide that offline reality a digital home."

Idle No More, and their new campaign Sovereignty Summer, is a grassroots movement that calls on all people to join in a peaceful revolution to honour Indigenous sovereignty and protect the land and water. Idle No More has inspired tens of thousands of people across the country and internationally to join in education and direct action.

The NationBuilder platform represents the next step in the evolution of Idle No More’s communications needs. As the movement transitions to the new website, Idle No More organizers express their appreciation for the work of Shannon Houle, who created the first idlenomore.ca blog, and Devon Meekis, who created and maintained the current INM site.

With momentum building around the new Sovereignty Summer Campaign, Idle No More organizer Jessica Gordon looks forward to the ways the new website will amplify the voices and the impact of the movement; she states “We will use the most effective web-based tools to engage and expand our political base both behind the scenes and on the front lines as we strive to build the biggest social movement for systemic change that Canada has ever seen.”