Guest Post: One of The Best Decisions I Ever Made - cStreet Campaigns

Guest Post: One of the Best Decisions I Ever Made

Guest Post: One of the Best Decisions I Ever Made 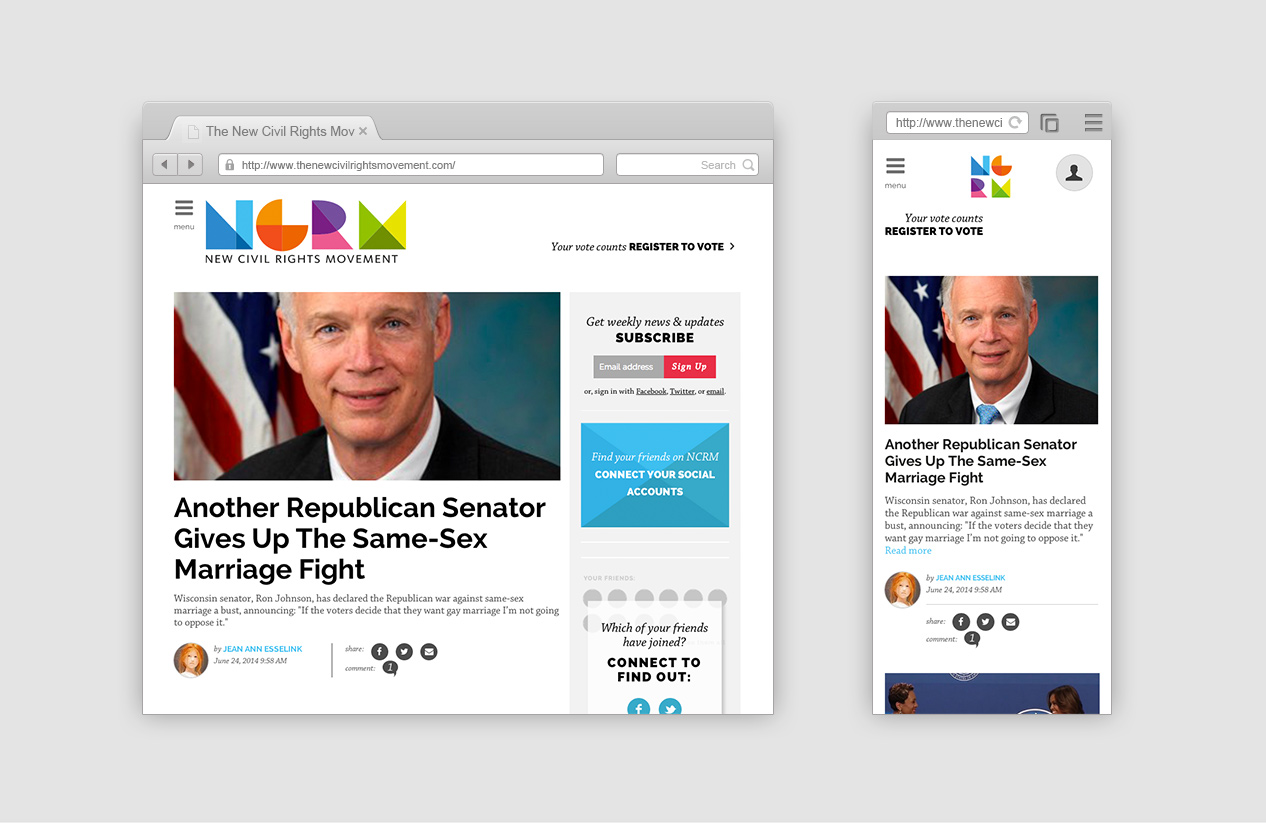 *Below is a guest post from David Badash the editor of The New Civil Rights Movement, a fast-growing news and opinion site focused on LGBT issues and progressive politics with two million+ monthly readers*

If you’ve ever watched one of those reality TV makeover shows -- where the host dismantles a restaurant and creates a brand new one in its place, one that builds on the heart and soul of a long-standing family business that was in desperate need of repair -- you’ll know how I felt when I first saw cStreet’s vision for our updated website.

As a small business owner, I know that every decision I make can have dramatic, long-term effects. As a publisher with an extensive social media reach -- we’re listed on Mediametric’s top 100 most-shared websites -- even just a few people giving us the thumbs down could have far-reaching consequences.

Back in 2008 I created The New Civil Rights Movement. It quickly became a fast-growing news and opinion site focused on LGBT and progressive politics. But five years later the decision to use Wordpress with a hosting service that didn’t grasp the importance of uptime in the breaking news business where traffic spikes always happen when you least expect them was becoming unbearable.

I mapped out a plan to bring The New Civil Rights Movement into the future.

Key essentials for our new site had to include the ability to send mass emails, create petitions, and interact more intimately with our readers. Site speed and a solid backend to reduce time and resources spent on technical issues of course were critical factors too. And among the most important factors was design.

We debated staying with Wordpress or moving to a different publishing platform. Squarespace was a top contender, especially because of its beautiful commercials and templates, but at the end of the day, NationBuilder won for two reasons. First, they met all our requirements. And second, they actually talked to us -- as many times as we needed, when we needed -- on the phone. Squarespace, not so much.

Once the critical decision of a platform was resolved, we had to resolve the next most-important factor: who would design the site.

We looked at as many operating Nationbuilder-based websites as we could find, designed by every certified Nationbuilder Architect. We didn’t just look at the sites they listed in their portfolios, we Googled to find ones that had their names on them. We narrowed the architect list down to ten. And then we interviewed them.

Our budget was fairly small, but more important than money to us was the ability of the design team to understand and honor the unique needs of a high-traffic news outlet that would be publishing on a platform designed mostly for customer management. We’re a site that is constantly updating, with a dozen new stories daily. The design team would need to import nearly 10,000 existing articles from a different platform, and they would need to please a reader base that is intelligent, design-savvy, highly-opinionated, political, and extremely active in social media. And they had to be a team I would want to continue building a relationship with even after the initial design process was complete.

In short, a bad decision on choosing the design team could mean disaster.

Most of the teams we spoke with were enthusiastic, but it seemed only a few were able to do all we needed.

And some made it clear they just didn’t want to.

Another sent us an email that included this sentiment when I told them their estimate was far higher than any one we had received -- sans the $47,000 one.

“If you want quality, you have to pay. Most of the architects are less experienced shops who provide cut rate solutions. It sounds to me like they would be a better match for your needs.”

After several email and telephone conversations with the folks at cStreet, and after talking with Nationbuilder about cStreet and our unique situation, the choice was clear: cStreet.

Definitely one of my best decisions ever.

Josh, Amy, and the entire team at cStreet made clear from day one they were as excited about our project as we were. They listened. They came up with ideas and solutions I hadn’t dreamed of. They created a plan. They amended it when it needed tweaking. And they created an amazing environment for our now two million monthly readers -- a number that doubled since we launched the new cStreet Campaigns design at the end of June.

Only once during the process did they say no to a request -- and even then they found a way to make it happen.

When Josh and Amy sent me their proposal I was impressed.

When they sent me their mockup of what the site would look like, I was stunned.

When the new site launched, it was everything I dreamed of, and more.

The team at cStreet is responsive, supportive, and strongly motivated to make their clients happy. Their level of creativity is matched by their level of technical skill. They don’t make rash decisions. And they don’t waver. They stand by you and remind you of the goal and support you through the process. And they’re patient.

Frankly, it was much easier than I had anticipated.

Working with cStreet Campaigns has been like living in a reality TV show -- one of the good ones -- where everyone wins.