Teachers across Ontario are organizing to bring better conditions to elementary schools for students, parents, and faculty. We helped them with the tools and messaging they need to get communities on board.

letters sent to the Minister of Education

Ontario elementary schools are starting to reap the devastating effects of chronic underfunding. Classrooms are packed to the gills, counsellors split their time between multiple schools, children with special needs are falling behind, students are struggling to keep up with bureaucratic testing schedules, and the specialist teachers that enrich the curriculum are missing in action. The result? Teachers spend evenings and weekends trying to compensate, spending their own money on supplies and extras, students act out in overcrowded classrooms, at times violently.

As the voice for elementary school teachers in the province, the Elementary Teacher’s Federation of Ontario (ETFO) has developed The Better Schools Education Agenda to focus on these pressing issues and set a better course for elementary school education in Ontario, now and into the future. They wanted to promote discussion and ultimately action on this agenda through a series of forums across Ontario.

Over a period of four months, cStreet Campaigns worked to deliver a digital, print and radio campaign that would compel parents and caregivers to become more engaged, build support for changes in elementary schools, and inspire people to act. To make sure the message resonated, we gave the Building Better Schools campaign a fresh brand, and a public voice that was hopeful, tangible, and aspirational.

Appealing to parents and caregivers, as well as members, would build a community ready to work together for better elementary schools.

In light of the conditions in Ontario’s elementary schools, it’s become important for teachers, parents and caregivers to connect and use their shared voice to advocate on behalf of the ones they care about the most: the children.

This project has three short-term goals for building awareness, and a long-term objective for continued engagement and action.

Hand drawn illustrations showing what could be possible with investment in education; by Jennifer Fryer

We split the campaign into short and long term goals and from there determined deliverable. It was imperative that the campaign had buy in from the union locals who were themselves hosting the forum. cStreet worked with provincial to develop the scope of the campaign and a creative direction that was inclusive of the materials and best practice the locals would need for promotion.

We helped to brand the campaign with a new logo and fresh aesthetic that was bright, hand-drawn and youthful.

We designed and developed a microsite for the campaign that was focused on action, delivered valuable content and had custom landing pages for conversion.

cStreet developed the concept and designed an advertising campaign that spanned social media and print.

Because the tools were a key part of the campaign, and the union wanted to leave the door open to participation from locals based on their capacity, cStreet gave a short presentation of both the creative and the tool set to representatives from all the locals. We then work closely with provincial to make sure that the capacity of local leaders was not being exhausted by internalizing as much of the collective work ourselves (for example, setting up event pages for each forum, and taking on the bulk of the promotion).

We worked with MWM360 to develop media targets based on existing demographic research provided by the union as well as MWM360’s expertise. This had effect on our creative messaging, which was expressly aimed at parents and guardians with the intention of reaching members vicariously.

Our job is to help you solve your problems with smart tools and crisp design. Get in touch with any questions or comments.

Elementary education is about children. We wanted to bring them back into the conversation.

Creative The cliche question asked in around education is “What kind of future are we making for our children?” In this campaign we wanted to buck that cliche and ask instead “Given the resources and environment they need, where will our children take us?” In other words, what kind of future are they making for us? The “us” is our local community—and the province of Ontario—but it also holds in it a promise of a better world for everyone, because we care enough to invest in young minds.

Digital Advertising We created a series of advertisements that were flexible and easily adapted for specific issues, like more supports needed for special needs and smaller classes make a difference. To convert ad impressions to campaign supporters, each ad had its own landing page (setup with UTM and Google Analytics tracking code) integrated with ETFO’s NationBuilder database. Four months later, we could see which ads were most successful (like a digital focus group!) and target new calls-to-action around those successful messages.

Website The original buildingbetterschools.ca website provided resources for parents and teachers related to elementary education. Our task was to move the website from information to action. Using NationBuilder, an all-in-one website, database and community engagement platform, we re-launched buildingbetterschools.ca with a positive, fresh and motivational tone that would inspire parents and caregivers to take action. The site featured clear engagement opportunities—upcoming events, campaign issues, actions, and sign ups—with well styled with custom templates. The site is easy to use, and responds to the needs of the campaign over time.

Toolkits We developed a toolkit for event organizers so they were able to promote and manage town halls using consistent messaging and branding, and generate data that could be used by ETFO’s provincial office for ongoing outreach. The toolkit included custom email templates, event webpages, workback schedules, social media shareables, and the back-end setup needed to efficiently collect RSVPs and people data in NationBuilder.

Data & Acquisition To help build ETFO’s non-member list, we partnered with Care2 to create a series of online petitions. The petitions spoke to parents and caregivers about important issues such as class sizes and individual supports for classrooms. In one month, the petitions generated 4,067 signatures from across Ontario, adding to ETFO’s broader community and voice. Meanwhile, the digital advertising campaign and social media share pieces drove traffic to the website, and generated new prospective supporters in the form of signups and event attendees.

Digital Campaigning Our combined acquisition efforts gave ETFO an impressive prospective supporters list to kick-off their engagement efforts. In June 2017, we broadcast emailed over 4,000 prospective supporters, inviting them to ‘click to send’ a letter to Minister of Education, Mitzie Hunter. Within 48 hours, 37% of contacts opened the email 10% sent the letter.

We created unique landing pages for each advertisement. The continuity between social media and the website helps built trust with our audience. 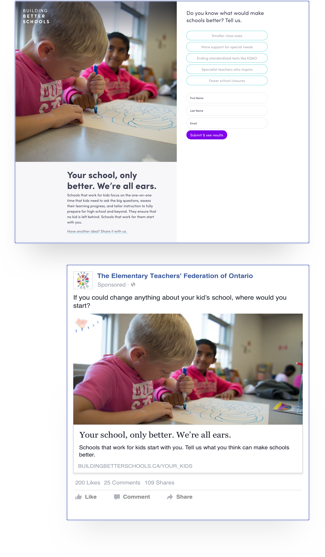 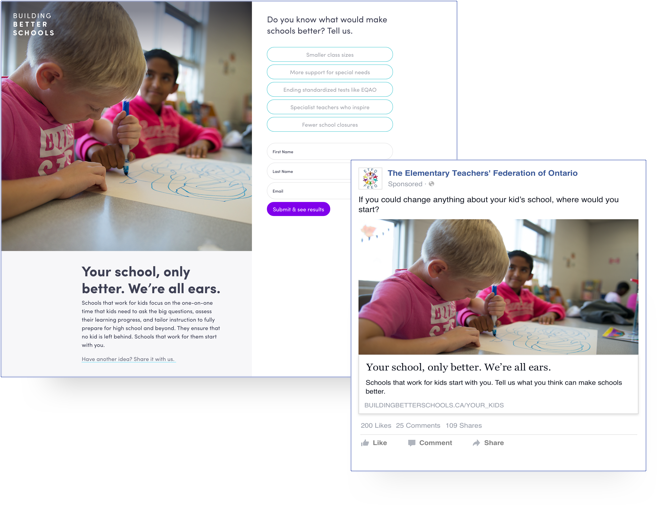 Our job is to help you solve your problems with smart tools and crisp design. Get in touch with any questions or comments.