Change the Course Launches to Envision an Equitable Climate-Stable Future

Change the Course Launches to Envision an Equitable Climate-Stable Future

Below is a guest post from Brad Schenck, the Digital Director at Rainforest Action Network (RAN) about a major new project launching today.  We've been working on Change the Course for most of a year and couldn't be more excited about today's launch.

Today, we’re launching a new project to envision a just and equitable climate-stable future — and brainstorm the strategies to make that vision a reality.

Tackling climate change can feel overwhelming. It can feel too big, too abstract. Fighting one battle after another -- and never knowing if it will be enough to stop climate change.

Some of RAN’s campaigners took a moment to pause from constant, target-based campaigns and really envisioned what  2050 would look like if we had reached a just and equitable climate stable future. The outcome was a renewed sense of optimism and clarity on possible paths forward.

Since then the team has launched an a series of in person visioning and action sessions:

A national movement that began by gathering more than 700 people in 19 cities across the country to think deep about a just and equitable future -- and then strategize how we get there.

Over the past year, we've been working with cStreet Campaigns to translate an empowering two day workshop into a compelling online experience. Take that platform to scale and do it in a way that partner orgs can take the platform and use it too. 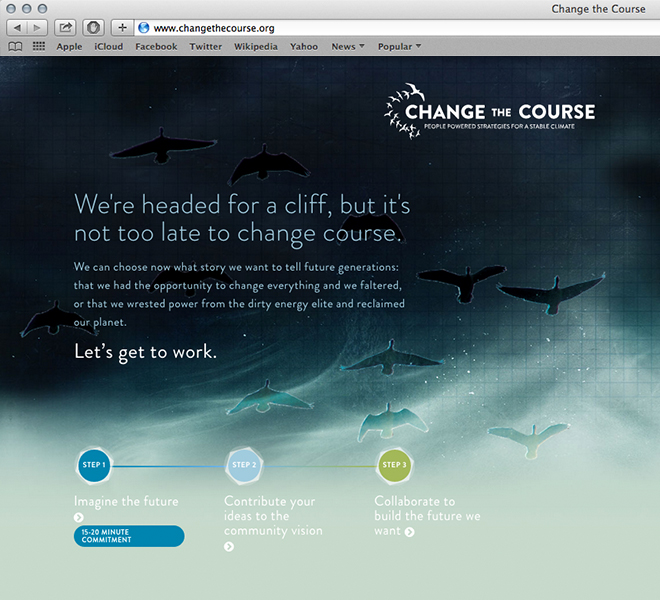 In a world where online we are asked to maybe take a 2 minute quiz, sign a petition, or tweet just once and call it action, it might look crazy to ask people to stop and basically meditate about the future they want. Then take that meditation and plot out a vision of the future they want. It has been an iterative process over the last 12 months evolving a really intense in person training into a platform.

The second part of the vision of the platform is to build it in a way allied groups could come on and own the backend. To not build another email capture device but from the ground up build something intended to be shared by the broad progressive movement.

It’s just day one, and we’re passing the first of many hurdles by opening the doors. But on day one we are handing over the keys to partners to take this journey together. I look forward to reading your personal visions, partnering with your groups, and together building a stronger vision of a  just and equitable climate-stable future!